Christians For Independence played an important part in the 2014 Independence referendum, and has continued to be active ever since. Read on for a selection of what we have done.

CFI were invited to hold a Time for Reflection type service at the first Alba party conference, which was held in 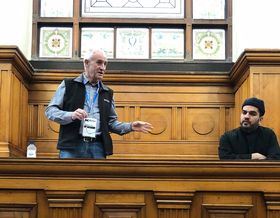 Greenock in September 2021.  CFI Convener Dave Thompson took the service on the Sunday morning, with a contribution from Muslim Shaykh Rehan Raza. It was a great chance to show that Christians have a part to play in politics, as well as to provide conference delegates with a opportunity to worship.

We are very sad that Canon Ken Gordon, a prominent and highly respected member of CFI,  died in June 2021.  We have written a short obituary for him.

Since the 2014 referendum, we did not give up hope but continued to be very active in the campaign for Independence.

We have held fringe events at SNP conferences, sometimes a service of worship, sometimes a talk or debate on an important issue. Here are details of some of our events:

In 2015 our Convener, Dave Thompson wrote an essay for a book, Christians in Parliament, by Andy Flanagan, and also gave a talk in Edinburgh on Christians in politics: 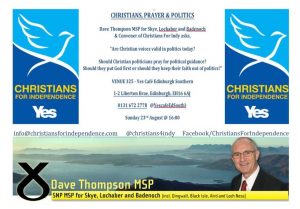 Our members have taken part in several Independence marches, organized by All Under One Banner: 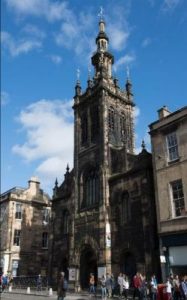 Our Annual General Meeting was held on Tuesday 19th. June at 7pm in the Edinburgh Quaker Meeting House, in Victoria Terrace, Edinburgh.  You can read a short report on it here.

The decision was taken at our meeting in June 2019 to try to make our meetings accessible to more of our members. We therefore held a members’ meeting in Perth on 31st. August, as we hoped that this more central location would enable more members to attend. Our meeting in the Salutation Hotel was well attended, and as well as receiving the usual reports on our activities and future events, members discussed a number of issues and made suggestions for what we should be doing. Following meetings were also held in Perth, until the covid pandemic forced a change to online meetings. 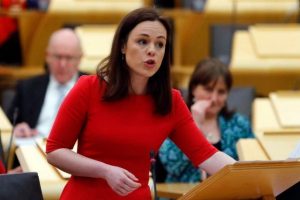 In an article in The National (20th. February 2020), Christians For Independence has backed the appointment of Kate Forbes as Finance Secretary. It had been reported that unnamed sources were concerned about her wariness over proposed changes to the Gender Recognition laws, and that her Christian faith could make her unsuitable for a senior government position. Her links to former SNP MSP Dave Thompson, whom she succeeded in the constituency of Skye, Lochaber and Badenoch, were also mentioned; Dave Thompson is also a committed Christian and a founder member and Convener of Christians For Independence (CFI).

In the article, Dave Thompson dismissed concerns about Miss Forbes’ suitability for office, saying that those who questioned it showed “a distinct lack of understanding of the Christian faith”. He also said that CFI welcomes all Christians believers, and that its core belief is Christ’s command to love our neighbours as ourselves, with independence giving Scotland the chance to build a “fair, just and compassionate society”.

He also explained that “As Christian views are very diverse, we do not take a position on those matters which are particularly controversial such as gay marriage, GRA, abortion and assisted suicide, which are left to the conscience of our individual members”.

The full text of the article can be found at https://www.thenational.scot/news/18247469.forbes-backed-christian-group-amid-lgbt-rights-concerns/

It was decided at our meeting on 23rd. November 2021 to issue a press release prior to the General Election on 12th. December, urging Christians to vote for an independence-supporting party. The press release was written by Dave Thompson, our Convener, and sent to as many as possible of all the Scottish media outlets. You can read the full text here.

In 2019 we set up a Theology Working Group to research arguments showing that a belief in Scottish independence is wholly compatible with Christian doctrine, and to formulate these arguments in a way that can be easily expressed in a leaflet for distribution amongst Christians. The first meeting took place in Edinburgh on 10th. August 2019, and a brief report was produced on its proceedings (see Theology Working Group page, link above).

The work of the group has resulted in the booklet: Scotland the Nation: a Christian Case for Independence, published in November 2020.

In 2019 the Scottish Independence Convention (SIC) set up a new campaign organization, with the stated aim of raising support for independence to over 50% (and hopefully much higher), and getting the Yes movement to a place in the opinion polls where we can successfully call for a referendum. The launch of the new organization took place in Edinburgh on 25th. April 2019.

Christians For Independence is a long-standing, voting member of the Scottish Independence Convention (SIC); our Convener, Dave Thompson, retired in August 2019 from his office as  Vice-Convener of the SIC and Director  of the SIC’s new campaigning company, Voices for Scotland.
In April 2019 the SIC published an update on its work: read the full report here.

CFI Convener Dave Thompson took part recently in a radio panel discussion which was broadcast on 11th. February 2019 by TWR UK, entitled Is it time Church leaders voice their views on Brexit?  He was debating with Jonathan Tame, Director of the Jubilee Centre (a Christian social reform organisation) and David Robertson of the Solas Centre for Public Christianity and minister of St. Peter’s Free Church, Dundee.  As well as being a founder member of CFI, Dave is an elder in the Church of Scotland and was until recently Vice-Convener of the Scottish Independence Convention.  The discussion dealt with issues surrounding Brexit, as well as the general question of Christian involvement in politics.

The broadcast can be heard on https://soundcloud.com/twr-uk/is-it-time-church-leaders-voice-their-views-on-brexit?fbclid=IwAR0p_GWvXzMXHtCg1-02fJhNTmJJ78cW-5D-ZsPC1po4V2lWzr855JAo0WU, and can also be accessed via TWR’s Facebook page:  https://www.facebook.com/TWRNewsDesk. 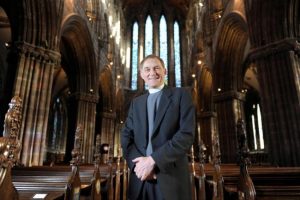 CFI members were sad to learn of the death on 4th. November 2018 of Rev. Laurence Whitley, an eminent churchman and Scottish patriot.  Read the full text of the obituary.

In February 2014 we welcomed the Church of Scotland’s report Imagining Scotland’s Future: Our Vision, which called for the referendum debate to focus on issues such as social justice.

In April a video was published on You Tube in which Dave Thompson and Dennis Canavan were interviewed about Independence and freedom of religion.

In May Dave Thompson took part in a debate on the STV programme Scotland Tonight.  And CFI committee member Neil MacLeod gave an address to the General Assembly of the Free Church of Scotland, emphasizing the important role of the Christian churches in Scottish life, and the place Christianity must have in the constitution of Scotland after Independence.

In June CFI held a series of meetings all over mainland Scotland to give Christians the opportunity to discuss the pros and cons of Independence, and in July meetings were held in the Western Isles: 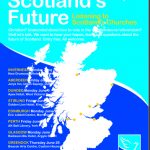 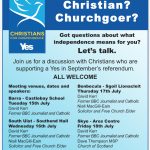 The meetings were well received and stimulated useful disussion, as was shown in reviews they received in local papers.

Also in July, an article by Dave Thompson suggesting why Christians should vote Yes in the forthcoming Independence referendum was published in the Church of Scotland magazine Life and Work.

Later in 2014 CFI inspired two full-page advertisements in the Sunday Herald newspaper. The first, in August, was a list of names of Church of Scotland ministers, the second, in September, a list of names of Scottish Catholics: all signed up to the statement: “We believe a Yes vote in the referendum makes possible a more socially just Scotland”. 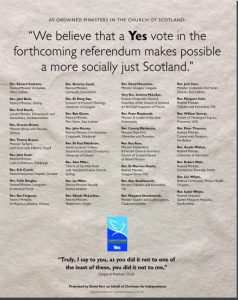 Church of Scotland Ministers for YES 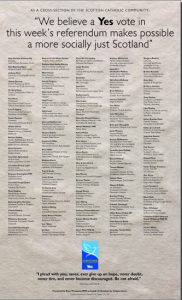 Several high-profile Church of Scotland ministers, including a former Moderator of the General Assembly and the then leader of the Iona Community also gave statements to the press, explaining why they were voting Yes.

And at the end of August a worship event entitled Let Love Shine was held, with activities for all ages. One of the stated aims was to “explore the Yes vision and how it fits with the Church”. 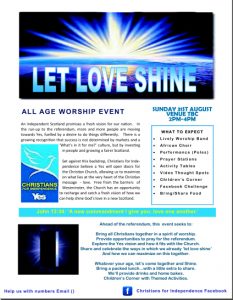 Launch of Christians for Independence 2014

Christians For Independence has been in existence since 2009, but in the run-up to the first Independence Referendum in September 2014 it registered itself with the Electoral Commission as a “permitted participant” in the Yes campaign. A launch event was held on 24th. February 2014 at the Scottish Storytelling Centre in Edinburgh. Various prominent Christian supporters of independence spoke of their reasons for supporting independence and explained how it fitted in with the Christian ethos.  The event was widely reported in the press and served to bring the Christian perspective on independence to the notice of the public.  As the Herald reported it: “Today is the day that Jesus enters the constitutional debate”.

Photos and speeches from the Launch

Christians For Independence was actually set up in 2009, and was active long before the announcement of the 2014 Independence referendum, mainly with services and meetings at SNP conference fringes. At the  March 2013 conference, for example, we held an event entitled Scotland the Compassionate, about overseas aid and asylum seekers, with speakers from Christian Aid and SCIAF. 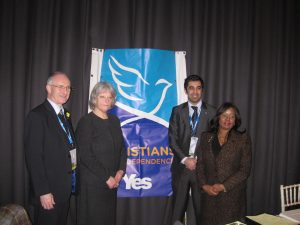