The launch of Voices for Scotland

The Scottish Independence Convention (SIC) set up a new campaign organization, with the stated aim of raising support for independence to over 50% (and hopefully much higher), and getting the Yes movement to a place in the opinion polls where we can successfully call for a referendum. The new organization was officially launched in Edinburgh on 25th. April 2019.  It aims to reach out to voters who are undecided and respond to their concerns. It will also co-ordinate grassroots activity and support local organisations, and will target mainstream and social media with relevant stories and will counter unionist-biased reporting with well-researched and decisive rebuttals. The organisation will be responsible to the Executive Committee of the SIC. Our Convener, Dave Thompson, was the first Chair; another well-known member of the Board, who spoke at the launch, was actress, comedian and SIC Director, Elaine C. Smith.

Dave Thompson at launch of Voices for Scotland 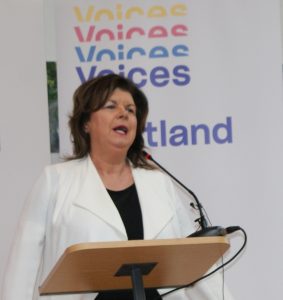 Elaine C Smith at launch of Voices for Scotland

Voices for Scotland is employing people to work on the various aspects of its role, such as media officer, researcher, support worker for local organisations. The SIC explained the rationale behind the establishment of the new organisation in an open letter to the independence movement.
Money is needed to finance this, and crowdfunding has just been set up at http://thisisit.scot.  Please see the letter  from Elaine C. Smith.