Our first in-person meeting since the pandemic will take place with a speaker sometime this spring: an announcement will be made as soon as possible.

At our last Zoom meeting, on 6th December, we discussed the implications of the UK Supreme Court judgment forbidding a referendum. Whatever the way forward is to be now, we will continue to campaign actively this year. Our first in-person meeting since the pandemic will be held later in the spring, with a speaker; an announcement will be made soon.

Our next members zoom meeting will be on 22nd March: all members are welcome to attend. If you would like to join us, please email us at christiansforindependence@gmail.com or fill in the contact form.

Following the judgment by the UK Supreme Court on 23rd November that Scotland can not hold a referendum on Independence, CFI Convener Dave Thompson was interviewed on TWR. He explained that the ruling was in accordance with the Scotland Act, a law made by Westminster for the benefit of Westminster. The SNP has consistently won mandates for a referendum; to be refused one is a denial of democracy. Since there is apparently now no legal route to leaving the union, it can no longer be considered a voluntary union. Westminster will not let Scotland go because it depends on our resources. But this is far from being the end for the Independence movement; we can proceed with a plebiscite election, the result of which would be recognised internationally. You can watch the whole interview here. 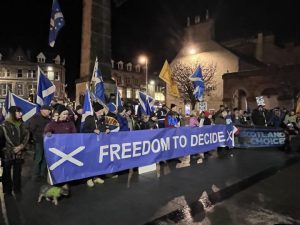 all over Scotland; Dave Thompson was one of the speakers at the Inverness rally.

We were invited to provide a speaker for a Falkirk Friends of Yes event,

held in the Park Hotel, Falkirk on Saturday 24th. September. Neil MacLeod (far right in photo) kindly agreed to give a talk and take part in the following discussion session. Neil is a long-time member of CFI, a lawyer and an elder in the Free Church of Scotland. You can read Neil’s talk about the work of CFI and about our beliefs here. Other speakers were Grant Thoms, editor of the Scots Independent, journalist and Yes campaigner Lesley Riddoch, Falkirk SNP Councillor Emma Russell, and Scottish Green MSP Gillian Mackay.

Several CFI members  –  some from as far away as Stornaway  –  took part in the March for Independence in Inverness on Saturday 20th August. The march had the biggest turnout of any since the pandemic, estimated at up to 3000. The march led from the Bught Park through the city to Castle Heather park, where a rally was held with several speakers including SNP MP Drew Hendry, Alba MP Kenny MacAskill and Green Councillor Chris Ballance. The whole event was friendly and good-natured, and it was great to see so many different aspects of the Independence movement coming together to demonstrate for our common goal of Independence. 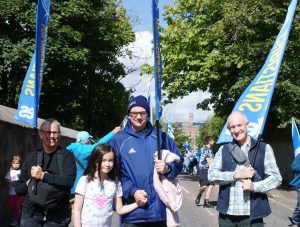 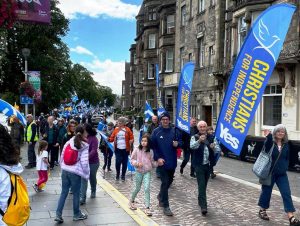