The event was addressed by Dave Thompson, then SNP MSP for Skye, Lochaber and Badenoch, and Denis Canavan, former Labour MP. 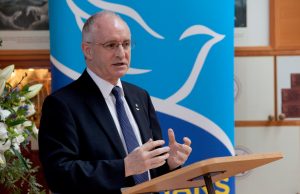 Also present, representing over 1500 years of Christianity in Scotland, was Saint Columba, played by actor John Shedden, while the proceedings were accompanied by music from the clarsach player Eilidh Munro. 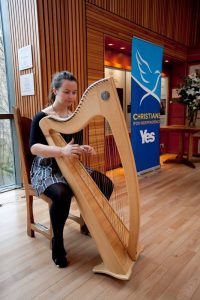 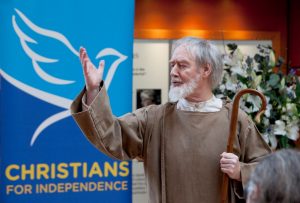 The Convener of Christians For Independence is Dave Thompson. In his talk to the group he said: “Christians play a hugely significant and overwhelmingly positive role in contemporary Scotland. ….. It is therefore imperative that anybody seeking to propose a new constitutional settlement for Scotland engages in a serious and respectful way with our churches. It is the firm proposition of Christians For Independence that a vote for self-governance in September’s referendum gives Scottish Christians the best platform upon which to work collaboratively with others in building a more socially just society at home and abroad”.

In his speech Denis Canavan said “Christians have traditionally campaigned for justice and peace, values which are shared by many other people in Yes Scotland. An independent Scotland will mean ridding Scotland of nuclear weapons and helping to build a caring, sharing society with greater standards of social justice”.